In Defense of Reality

One of the most important ongoing decisions of your life is what reality you will choose to live in. People often mistake reality for a singular static state of affairs, but things really aren’t that simple. Reality is a fluid thing, it is science and intuition, seen and unseen, observed and perceived, lived and felt.

No two people will ever see the world exactly the same, and no one is “right.” Consider if one out of the 7 billion people walking this earth sees it as it really is, and the rest of us, the 6,999,999,999 of us, are mistaken.

This is pretty inconceivable, especially since no two people alive at different times will see the earth the same way either, so then one person throughout all of human history would have got it, if only for a moment? No, thankfully we are all passionately and beautifully wrong, all the time.

So if we are all constantly and perpetually wrong, then what are we to do?

Well, first things first is to let go completely of any need to be right.

If we are all wrong, or at least not “right” on a constant basis, if we accept that we are always only knowing to the best of our present understanding, then to acknowledge when we are wrong is a magical moment. It is the only moment in life in which we grow.

When our perception is challenged and we are able to rationally consider the opposing viewpoint, and then potentially evolve our own as a result, this is strength. This is growing, this is evolving, this is the kind of thinking that is needed for humanity to move forward.

Sadly this is not something that is championed in our society. To change your mind is viewed as a sign of weakness. In politics a person is labeled as a “flip-flopper.” In truth, a person who has never changed their mind in their life is going to be the worst kind of idiot: forceful, desperate, and simultaneously completely weak inside and terrified of someone finding out… even themselves.

Being able to change your mind is a sign of great character. A person who can change their mind isn’t afraid that without the identification with the previously held belief that they won’t know who they are anymore. It is a sign of a strong identity and it makes an excellent foundation for a strong reality.

What is unfortunetly more common is deriving a sense of self from the random set of viewpoints one has come to hold as a result of their up-bringing, their reactions to that up-bringing, and the influences they allow, often unwittingly, into their life.

Neuroscience studies have shown that the brain of a person having their political beliefs challenged shows activity in the precise areas responsible for both personal identity and for emotional threat response.

Our brains care more about preserving their sense of who they are and the resulting emotional homeostasis than they do about deciphering facts and information into well forms perspectives on reality. For the sake of humanity, this is a fucking problem.

The desire to be right and the desire to be educated are fundamental opposites. If we fail to know ourselves on a core level, then we attach to the external world, to our belief systems, to what others tell us to think, and all of this becomes our reflected view of who we are. It’s a false identity, but as a culture we are so lacking in awareness that we don’t know the difference.

This is why Eastern thinkers post things like: “If every child in the world learned to meditate we would eliminate war in one generation.”

No person who truly knew themselves and had their own relationship with the universe in which they reside would need to follow a religious or governmental organization to know who they are or who they are supposed to be.

No person who saw the presence of the God energy within themselves would ever think it correct to take up a weapon and kill another in the name of that energy. It would be so painfully apparent that we are not only just team human on this planet but team Earth, team Universe. Half-hearted notions of nationalism and patriotism would fall away, and never again would we accept separation under the guise of unity.

Now I’m not saying we can solve all the ills of the world without military, but we should at least be aware that it’s a necessary evil due to the universal lack of awareness. People don’t know who they are or what they are, so they are clinging to beliefs that they were indoctrinated into, opinions that are at best random, and a sense of self rooted in a fear of genuine curiosity.

As we learn to know our true self and to divorce the self we came to know as our worldly identity, we are often met with great opposition. There is a bombardment of shit on all sides. The television programming you how to think, the world telling you what is important, and people who swear they know who you are holding back your evolution.

On the journey to reconnect with yourself, you must be vigilant to the distractions of the masses who are only aware of the world outside of themselves with no regard for the one within. The realities of others are threatened when you don’t subscribe to the same bullshit. This is why you must learn to defend your reality.

I wrote an article last month for an organization I do performance consulting and mindset coaching for. It’s about minding your information diet and being ruthless to things that don’t matter. As you let go of any need to be fused with your existing reality, as you surrender with big open arms into venturing toward the big unknown in search of what is worth knowing, it becomes so overwhelmingly obvious that one must eradicate all the garbage that can infect one’s perception.

Notice the difference here, there is no sense of self being derived from our path. Our sense of self comes from within, and our pursuit of information is lead only by what is worth knowing. We aren’t turning off reality television and TV news because they challenge our uniformed viewpoints which we must cling to in order to reinforce our identity. No, we are tuning out the distractions as we search for a better path for ourselves and humanity.

There is no horse in this race for the individual. There is no identity to reinforce. This is humility, this is an act of service for mankind. This is leaving your ego as close to the door as one can manage at the beginning of every day, and diving into a world of knowledge in which we are forever the child.

There is an excellent book by Ryan Holiday called Ego is the Enemy, and in that book Holiday chronicles how throughout history the inability to distinguish true confidence from Ego has been responsible for some of mankind’s greatest downfalls. It is the Ego who tells us that we wise without study, that we are different than, separate from and better than. It gives off the delusion of superiority which stands directly in the way of growth, education, and a better understanding.

To summarize our way forward, we must first learn to stop fusing with our every thought, and realize they are just the thoughts we are hearing right now, no more and no less.

Secondly, we must master our ego and stop deriving our sense of self from the thoughts we just stopped fusing with. Learn to love cognitive dissonance, learn to see the uncomfortable feeling of being faced with a viewpoint counter to your own as the pleasurable sensation of growth.

Finally, we must master our influences. This doesn’t mean to wipe out those counter to our own, far from it. The greatest minds throughout history have always surrounded themselves with a cabinet or trust of individuals who had opposing viewpoints, they understood the random and unequivocal nature of the present thoughts flowing through their minds. With the ego aside, we are free to trim our influences on the basis of substance and not subjective viewpoint.

This equilibrium of managing the journey outward alongside the journey inward allows one to become the architect of their own existence. Equally as important, it gives others the inspiration, encouragement and freedom to do the same.

When we as humans learn to reject the views which don’t serve us, when we say no to the organizations and conditioning of the outside world, only then will we grasp the privilege of authoring our own experience; only then can we choose to live beautifully. 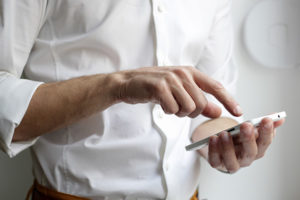